Back on the road – Across South Dakota

I decided to get some chores done while I had some down time and a motel room, so the first thing to do was laundry. I washed all of my gear and clothes in the bathtub and hung it to dry.

I passed my bike off to Yamaha Motorsports in Hutchinson, MN to have the chain and front and rear sprockets replaced, and was finally ready to roll after hanging out in Minnesota another day. 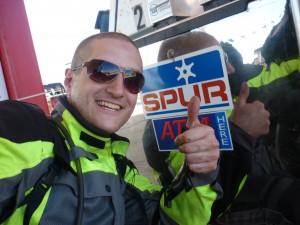 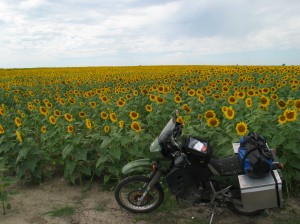 A gigantic field of sunflowers in SD 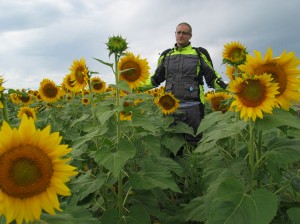 Yours truly. Thank God for tripods and camera timers

I headed West, and decided to camp out for the first time on the trip. I love camping, and I spent a lot of time shopping for the perfect camping gear, so I definitely want to be using it on this trip.

After a fine night of camping, I continued West and stayed just outside of the Badlands near an Indian Reservation. I stealth camped after following some dirt trails back into the plains, and saw some beautiful wildlife. 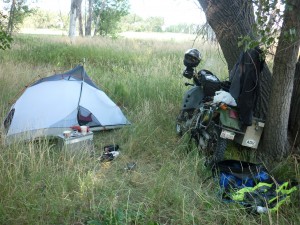 Pheasants and deer just outside my campsite. I also saw wild horses

At the Badass Badlands 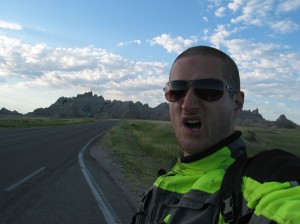 How many different faces can you make? I need some new ones for the trip

The next morning I got to the Badlands, which I have never seen but have heard that they are a treat. Let me tell you, they really are. Ragged and beautiful. After passing through the Badlands, I made for the Black Hills and Mount Rushmore.

Driving through the Black Hills

I got tired of riding the roads in the Black Hills and wanted to do some exploring, so I took some of the dirt trails that I found. There were no fences on these trails, so the wildlife was free to roam. I was in search of a bison (or buffalo) as I have never seen one. Well, I got what I was looking for. Here he is.

I guess the bison didn’t like to get his picture taken, as just after I shot this, he started to act annoyed and walk towards me. I got a little nervous after hearing that Bison can run 35mph, so I threw the camera into my pocket and got ready to ride just in time… he started to chase me! The bike roared and I sent the biggest dirt cloud into the air as I took off.

Glad I didn't turn into this guy

I fit right in with these guys

I wanted to swing by Mount Rushmore since I was right next to it, but everyone I’ve talked to said it was cheesy and the only thing to do is to see it, so I rode by and did just that.

LA born. Michigan raised. Current Chicagoan. Technology nerd. MotorcycleÏ€ enthusiast. I quit my job, sold all of my stuff, and am riding my dream through the US, Canada, Latin and South America.
View all posts by Sper →
This entry was posted in adventure, blog, klr650, RideReport, vagabonding. Bookmark the permalink.

1 Response to Back on the road – Across South Dakota